Home » Films » The Alchemical Dream—watch with a membership at: gaia.com/sacredmysteries 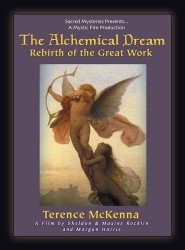 The Alchemical Dream
Rebirth of the Great Work
Terence McKenna

In the mid-1990's Terence McKenna and Mystic Fire's Sheldon Rocklin teamed up to make this rich and exciting film. Little did they know that this would be their last film. Originally titled Coincidencia Oppositorum: The Unity of Opposites and filmed in Prague with Terence portraying his usual erudite rendition of the Irish Bard, this filmed classic takes us on a journey into the alchemical renaissance of King Frederick V and his wife Queen Elizabeth of Bohemia. Playing the role of John Dee, court magician for Queen Elizabeth of England, Terence McKenna shows us how the promise of a return to the tradition of alchemy was almost instituted in Europe. He also shows us that this early attempt at the creation of an alchemical kingdom actually lead to the European Renaissance and the institution of Cartesian science and the beginnings of rationalism within the western mindset. This incredible film is not only beautifully filmed but is Terence McKenna’s finest performance and a worthy eulogy to his genius.

"It sounds incredible, but in this film, McKenna outlines the political economic and alchemical history of Europe and the entire hermetic tradition virtually from it’s inception to the 17th Century. Like all skilled storytellers, he draws the viewer along with him into a half known world of intrigue, espionage and mystery. The background scenery is gorgeous and the film is stunning in it’s cinematography. With this film, the viewer get’s more than expected. It is truly a legacy for modern mankind from both the creative minds of Terence McKenna, Sheldon Rochlin and the perseverance of Morgan Harris.”
--Jennifer Hoskins, New Dawn Magazine

"McKenna brings over the mysterious world of alchemical thought, and it is obvious that he is the ideal man for this job; sufficiently erudite, to present the ideas so that they remain on the edge of understanding, teasing us forward into areas of unexplored mind. This is a film that will be watched again and again, each time giving us a further hint at the meanings behind the alchemical symbolism, nudging our understanding closer to the place of transmutation. Brilliant!"
--Geoff Stray

"If only a fraction of McKenna’s thought is true, he will someday be regarded as the Copernicus of consciousness.”
--The Village Voice

"In the twilight of human history, McKenna's prescription for salvation is just so crazy it might work."
--Alex Grey