Home » Films » 2012—watch with a membership at: gaia.com/sacredmysteries

2012—watch with a membership at: gaia.com/sacredmysteries 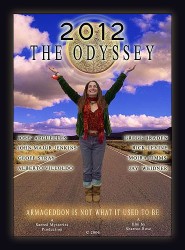 The Mayan Calendar is ending on December 21st 2012. What will happen to us between now and then? Are there other prophecies that also predict the closing of this world age and the start of a new beginning?

Join author Sharron Rose on an adventure into the future. In this exciting and thought provoking feature documentary she travels across the entire United States speaking to the many experts on this fast approaching prophecy. They help her to reveal the secrets that will unfold before our eyes and will shape our future.

Featuring noted experts Jose Arguelles, Gregg Braden, John Major Jenkins, Rick Levine, Geoff Stray, Moira Timms, Alberto Villoldo, Jay Weidner, the Incan Elders and more, this film shows us that the coming world is ours to reshape and to remake in any way that we deem possible.

Sharron Rose also travels to the Georgia Guidestones, Washington D.C., the Denver Airport and many other places to discover that there are numerous groups and people who understand that this present age is ending and a new world is now just beginning.

Discover the secrets of the Mayans, the Incans, the Alchemists, the Christians, the Masons and others of our ancient ancestors concerning the end of time and the promise of our destiny as human beings.

"A metaphysical tour of time, space, spirituality and philosophy. The information level is high. This is an eye-opening film." -New Dawn Magazine

"A powerful and poignant film" -The Smoky Mountain News

"The Sharron Rose film casts the end of this age as a time of opportunity rather than annihilation, an age whose final chapter will be written by enlightened humans, not fate or God." - Carl Feather, The Star Beacon, Ashtabula, Ohio

"Join Sharron Rose as she travels across the USA speaking to respected researchers about this fast approaching 'end date'. Importantly this film ... 2012 The Odyssey ... shows us that the coming world is ours to reshape and to remake in any way that we deem possible. It reminds us that we need not be victims of events beyond our control. Very informative and thought-provoking". - Duncan Roads, Nexus Magazine

“The film brings together the best elements of /What the Bleep/ and /An Inconvenient Truth". -Duncan Campbell, NPR radio host and host of the global website www.livingdialogues.com Dialoguing with Other Visionaries from Across the World

"This is a great intro to the Mayan prophecies and concepts of time. The interviews take a spiraly path into all the ancient wisdom and signs pointing to 2012. It ends with a blessing from the Q'ero Shamans of Peru, who are featured more in-depth in Sharron Rose's latest film, Timewave 2013". -Molly Hall, About.com Guide to Astrology